Gord Steinke and Karen Bartko GlobalNews.ca
June 2, 2021  8:35 pm
With the name launch out of the way, the Edmonton Elks president and CEO Chris Presson said the focus now is on preparing for the new football season. He joined Gord Steinke to talk about it.

A day after the football team’s new name and brand was unveiled, the Edmonton Elks’ president and CEO said fan response has been exciting and positive.

“It’s 24 hours later and we’re extremely pleased with fan response. I don’t think it could have gone much better,” Chris Presson said.

The move comes 10 months after the club dropped its longtime name, Eskimos. The CFL franchise had been called the Edmonton Football Team until Tuesday’s announcement.

Elk was one of seven potential name changes the Edmonton Football Team provided on its shortlist. The others included: Evergreens, Evergolds, Eclipse, Elkhounds, Eagles and Elements.

“It’s been extremely exhausting for myself and staff, but we’re just so pleased with the name and logo we’ve delivered and the excitement around it,” Presson said.

With the name launch out of the way, Presson said Wednesday the focus now is on preparing for the new football season as the province reopens — getting ready for the possibility of a stadium at full fan capacity if Stage 3 is reached by kickoff.

The province’s plan calls for all restrictions to be lifted two weeks after 70 per cent of Albertans age 12 or over have received at least one dose of a COVID-19 vaccine, with numbers of cases declining as well.

“As long as we hit those targets, which we anticipate doing by the beginning of July, it will be full capacity,” Kenney said last week.

The league still has many hurdles to clear to get off the ground, including having return-to-play protocols approved by all six provinces and the Public Health Agency of Canada. 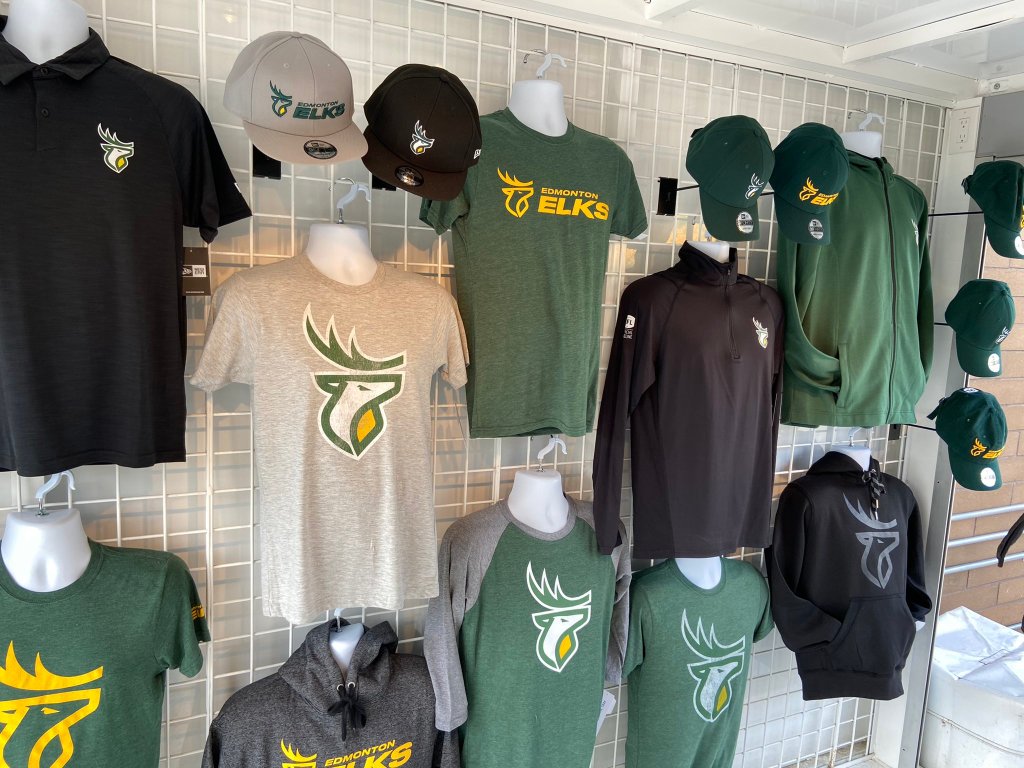 Edmonton Elks merchandise is displayed at Commonwealth Stadium on June 1, 2021.

That said, merchandise is already a hot item. Gear featuring the team’s new name and elk logo were unveiled as part of Tuesday’s launch.

While Edmonton’s helmets will bear elk antlers, the club plans to still also use its other logos, including the iconic EE.

“We’ve sold a lot of merchandise (Tuesday) in a short period of time and we’re already reordering today,” Presson said.

“It’s been an exceptional response.”

The league has tentatively scheduled starting a 14-game 2021 campaign Aug. 5 after not playing in 2020 due to the COVID-19 pandemic.

— With files from Dan Ralph, The Canadian Press