The number of times Hamilton police officers used force was down last year, according to a new report from the service.

The report, presented to the Hamilton Police Services Board meeting last week, found that there were 361 use-of-force incidents in 2021, a decrease of 17 per cent from 2020, when the service saw 431 incidents — the highest number reported within a 10-year period.

Use-of-force incidents include things like officers drawing, pointing or firing their handguns, using a baton or conductive energy weapon (CEW), or using physical force on a person in any way.

The most common type of use of force involved either showing a CEW (80 incidents) or discharging a CEW (65 incidents), followed by pointing a firearm (132 incidents).

Two types of force saw more than double the amount of reports year-over-year, including handguns being drawn, which increased from 42 to 91.

“Empty hand soft” incidents — which are described as things like “wrist locks”, “pressure points” or “handcuffing” — jumped from 14 to 37.

“An officer is only required to submit a report for Empty Hands Soft if they ‘use physical force on another person that results in an injury requiring medical attention’ or if they use this option in conjunction with another option that requires mandatory reporting,” reads the use-of-force report.

Ten of those 37 incidents involved minor injuries that were reported to have been addressed with medical attention.

Overall, there were 71 injuries reported that involved either an officer, a member of the public or both, and 44 of those injuries involved removing a CEW probe from the person who was shot.

There were 19 instances of officers shooting their firearm but all 19 of those involved euthanizing deer, according to the report.

Deputy chief Paul Hamilton said 72 per cent of last year’s use-of-force incidents involved officers responding to a weapons call and 110 of those weapons calls had a firearm as the most prominently featured weapon.

“Today’s police officers are encountering an increase in the use of weapons by subjects,” he said.

“We are seeing an increase in guns on our streets and in 2021, officers recovered 224 crime guns. Currently, we are seizing a gun off the street every 42 hours.” 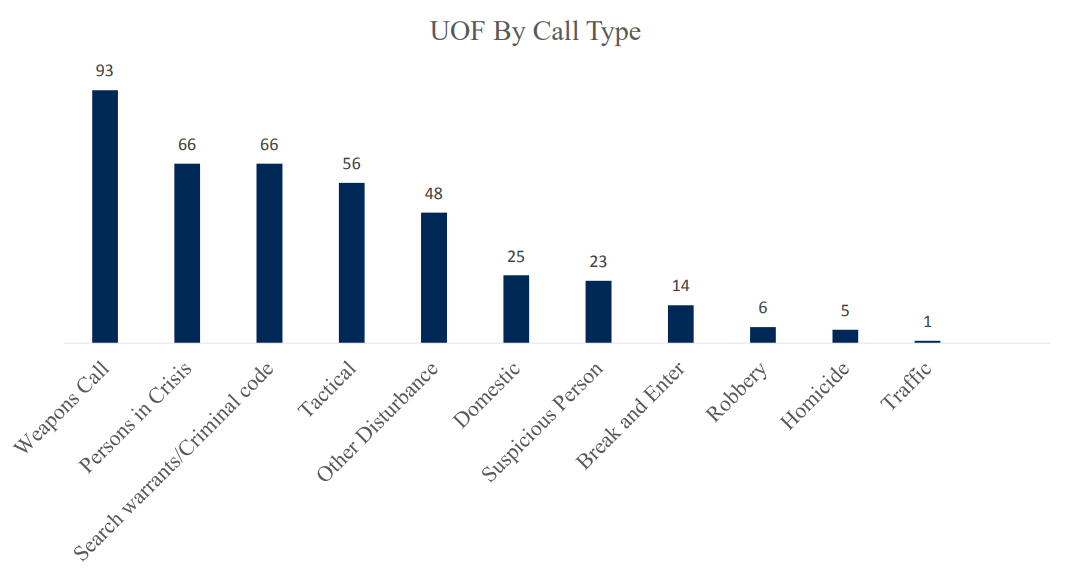 Last year, the solicitor-general made it mandatory that use-of-force reports indicate the racial background of the people who were subject to force by police, although that data must be based solely on the officer’s perception.

There were a total of 342 incidents of use of force involving people and 314 individuals involved in those incidents, but in eight different reports, officers identified four subjects as different perceived racial backgrounds. 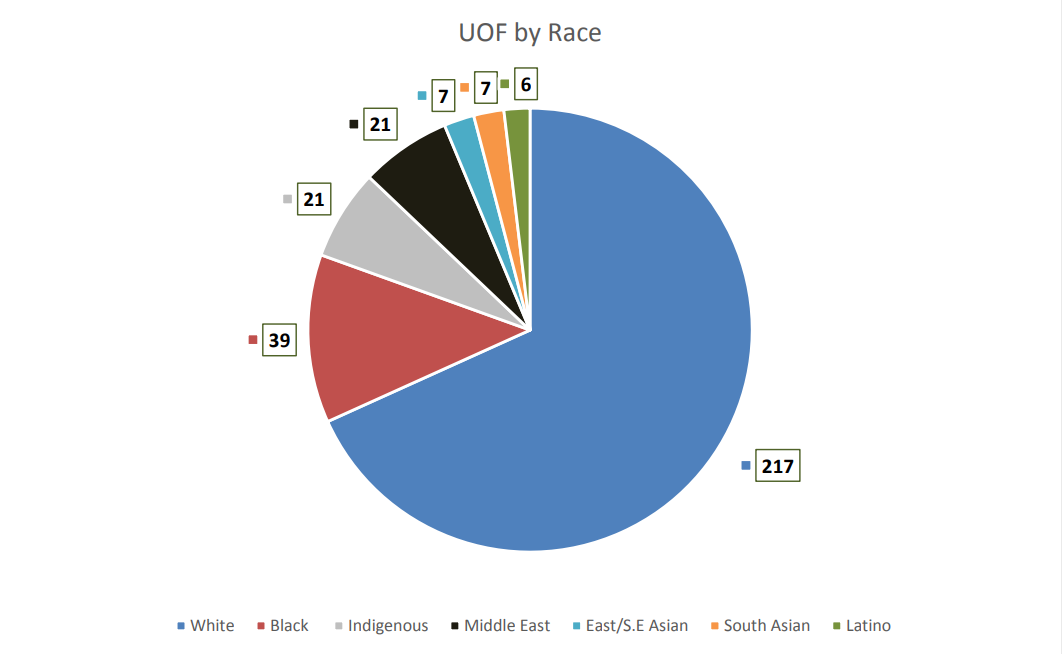 For the first time, the use-of-force report includes data on where in the city the incident happened and where the subject lives.

The vast majority of the 256 unique incidents took place in the L8L forward sortation area (FSA) in the lower city.

Not everyone who was subjected to force by Hamilton police in 2021 was actually from Hamilton. Only 64 per cent had a FSA that could be mapped and 16 per cent had no fixed address. 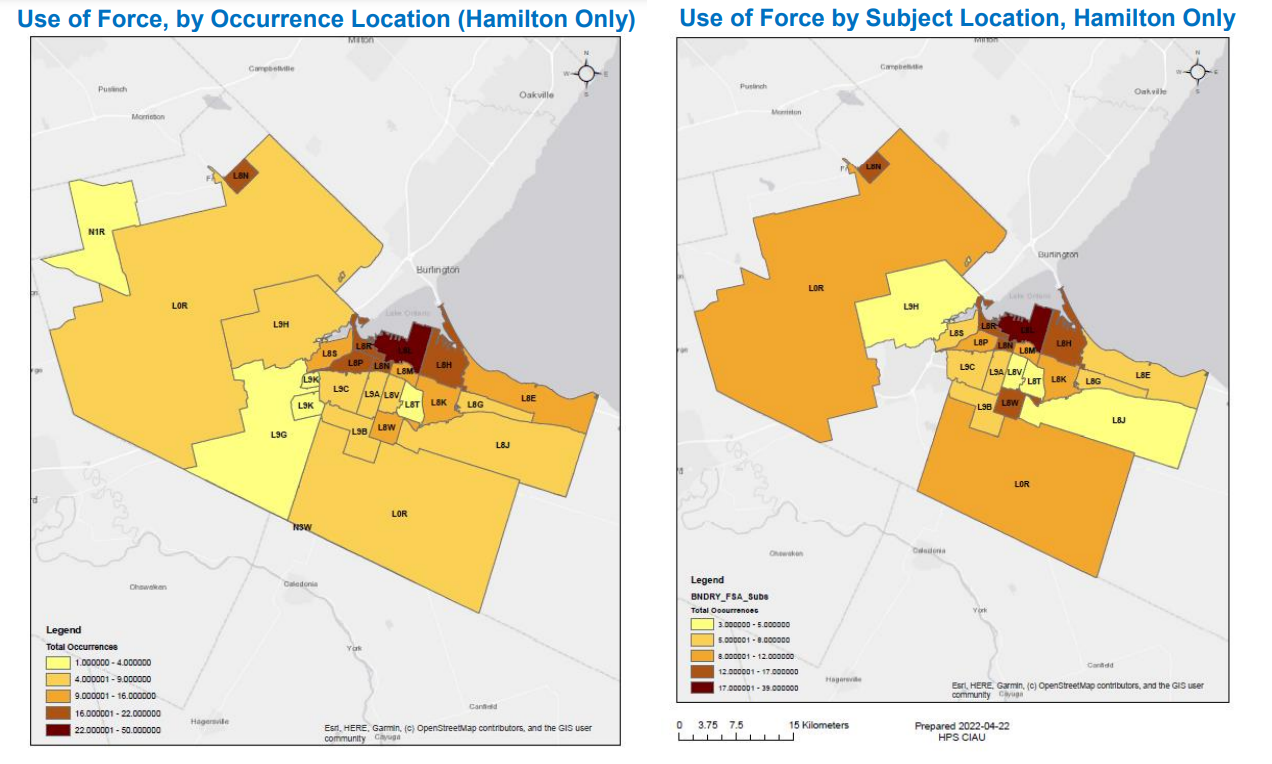 The service’s deputy chief acknowledged that, although use-of-force incidents decreased last year, police still need to do more to prevent force from being used at all.

“We will continue to work with our community partners to find the best way to intervene and deliver public safety while ensure ensuring the least amount of force is used,” said Hamilton.

That includes new virtual reality training that is being conducted in partnership with Wilfred Laurier University and Toronto Metropolitan University that aims to make police better at responding to mental health crises.

So far, Hamilton said 421 officers have received crisis intervention training and the goal is to get all officers and front-line staff trained, although no concrete timeline has been established to accomplish that goal.