The City of Orlando, Fla. has apologized after controversy arose around comments released for their annual Fourth of July fireworks celebrations.

In the statement, published to the city newsletter last Friday, it said:

“A lot of people probably don’t want to celebrate our nation right now, and we can’t blame them. When there is so much division, hate and unrest, why on earth would you want to have a party celebrating any of it?

“But in all seriousness, you know in your heart, Fourth of July fireworks are amazing, especially when you are standing in 90° heat, 100% humidity, next to 100,000 of your closest friends,” the newsletter added. “In that moment, something takes over and we all become united in an inexplicable bond.

“Yes, America is in strife right now, but you know what…we already bought the fireworks.”

Although the post didn’t explicitly describe the “strife” America is facing, many Americans have hinted at eschewing celebrations after the Supreme Court’s overturning of Roe v. Wade, disheartening news to come out of the Jan. 6th hearings, multiple mass shootings in recent weeks, and the costs of rising inflation.

The statement sparked disappointment online, with some criticizing the “un-American” message.

Yikes. City of Orlando, is this your official position on our country and on 4th of July? @citybeautiful pic.twitter.com/DJBfaJBGxC

The local police union also called out the message, issuing a statement that called the City’s comments “inflammatory” and “in poor taste,” reports Newsweek.

It’s also disrespectful to our Veterans who risked all for our Freedom. July 4th isn’t about the fireworks, it’s about the world’s first Constitutional Republic and the great experiment we call America. pic.twitter.com/qVylhyQoX6

A statement from the City of Orlando pic.twitter.com/CbCcOOCATz

— City of Orlando is Prepared for Hurricane Season (@citybeautiful) July 2, 2022

“We understand these words offended some of our residents, which was not our intent,” Saturday’s apology read. “We value the freedoms we have in this country and are thankful to the men and women who have fought and continue to fight for those.

“We take pride in celebrating the 4th of July to express our gratitude to those men and women and honor the country we live in.”

“Y’all do not need to apologize — your first email captured the tone of how many Americans (and Orlandoans) are feeling right now,” Florida state Rep. Anna Eskamani tweeted on Saturday. “It’s ok not to be ok.”

Y’all do not need to apologize — your first email captured the tone of how many Americans (and Orlandoans) are feeling right now. It’s ok not to be ok.

Others said the City’s original message encapsulated their feelings perfectly.

“No you were CORRECT! We are truly in unprecedented times, going back and stripping us of our freedoms and undoing history. They say we should give power back to the states right?.. ORLANDO HAS A VOICE AND YOU SPOKE TO IT!” tweeted one person.

“Absolutely NOTHING wrong with the original tweet!!! The truth hurts sometimes and that is EXACTLY how most of us are feeling!!!” wrote another.

Meanwhile, American celebrities and public figures have been sharing their own messages about why they are choosing to forego Independence Day celebrations this year.

Kim Kardashian shared a post to her Instagram Stories that read: “4th of July has been canceled due to a shortage of Independence. Sincerely, Women.” 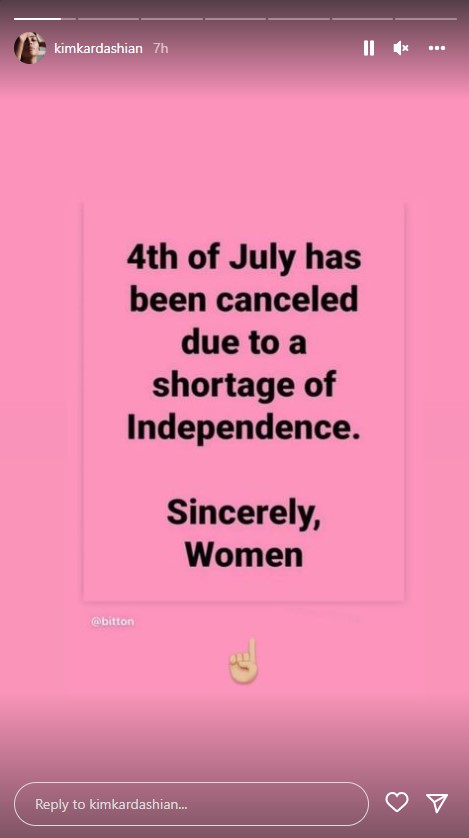 Will NOT be celebrating July 4th today🥰🥰 pic.twitter.com/o1TwAt6fpK

And actor Jessica Chastain shared a photo to Instagram, where she gazes into the camera while raising both of her middle fingers.

“Happy ‘Independence’ Day from me and my reproductive rights,” she wrote.