It’s the Canadian Football League’s most intense rivalry on steroids.

When the Hamilton Tiger-Cats and Toronto Argonauts clash Saturday night at BMO Field it will mark the start of a never-before-seen football showdown.

While back-to-back games involving the same two opponents is nothing new to the CFL, having two play each other four times in five weeks is on another level.

In addition to Saturday’s game, the Ticats (2-5) and Argos (3-3) will also meet Aug. 12 at Tim Hortons Field, Aug. 26 in Toronto and on Sept. 5 in Hamilton for the annual Labour Day Classic.

Saturday’s pregame show on 900 CHML radio begins at 6 p.m. Kickoff is at 7 p.m. A half-hour after the final whistle, catch The 5th Quarter postgame show on CHML, 900chml.com and CHML’s Facebook page.

Already holding a two-point lead on the Tiger-Cats for top spot in the East Division, the Argos are looking to secure their fourth consecutive victory over Hamilton dating back to the shortened 2021 season.

Toronto won three of their four meetings against the Cats last year and a similar showing leading up to Labour Day would go a long way to thrusting the Argos towards a first-place finish in the East.

Coming off their second win in three weeks, the Ticats will get a boost on the field as they aim to continue their upward trend and join Toronto atop the division.

Reigning East Division defensive player of the year Simoni Lawrence will return to Hamilton’s starting lineup after the hard-hitting linebacker missed the last three contests with a groin injury. He is three defensive tackles away from passing Shannon Garrett for 16th on the CFL’s all-time list. 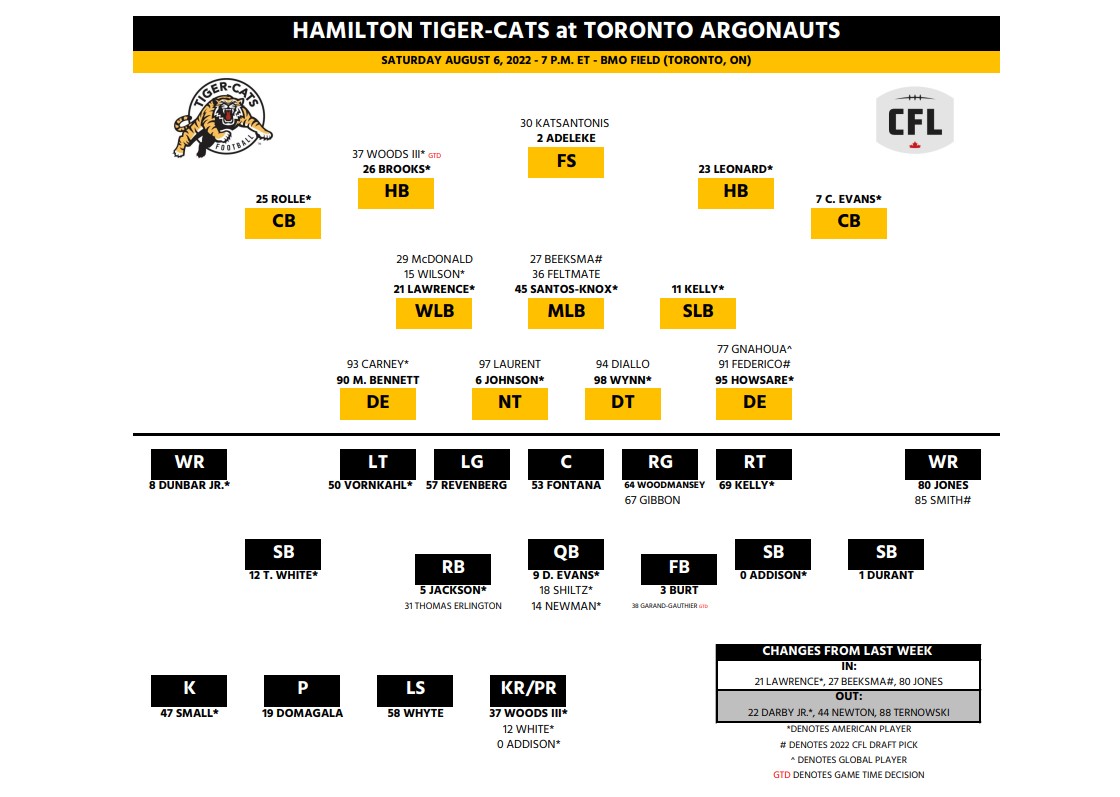 The game also marks the first time in the regular season in which Argos receiver Brandon Banks will face his former team.

‘Speedy B,’ who is 98 receiving yards shy of 6,000 yards in his career, starred for Hamilton for eight seasons and was the league’s Most Outstanding Player in 2019.

However, with veteran receiver Eric Rogers set to make his season debut after spending the first six weeks on the injured list, it appears the 34-year-old Banks will be relegated to a backup role on Saturday.